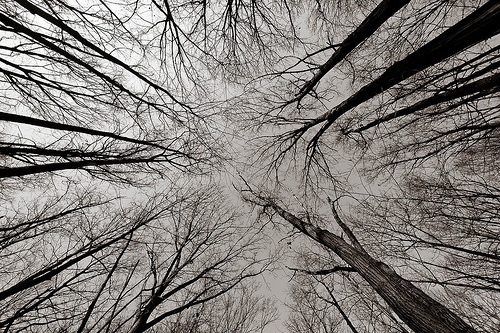 I got to head out with Tim again this morning. After a stop in Wilmette at the Bahá'í House of Worship and Gilson Park we went to the Dam No.1 Woods on the Des Plaines River. I'd visited here before in the winter and got some good shots so I was pleased to get to go back. Tim has been renting a Sigma 8–16 mm lens, and he was kind enough to let me try it out again. This lens definitely is great for certain situations and not so good for others—I think it suited the woods well. This shot was taken lying on my back in the middle of the trail. Fortunately there were very few folk around so there was no one to see me.

People always tell tales of the mob burying bodies in the woods at the Skokie lagoons on the Chicago River, and Tim and I were joking about finding bodies in the woods as were bushwhacking through the brush… on the way back to the car we found a knife stuck into a tree at the side of the trail! The scary thing was that neither of us had noticed this on our way past when we were walking the other way.